I haven’t updated this blog-thing in a long time – kept letting things get in the way, really – but I figured I should try to do something now and then, so here’s the first of (Insha’Allah) a series of ‘childhood inspirations’: things that happened to me when I was a child, and that have inspired or influenced me positively in my life.  For the most part, they were random acts of kindness – so they will probably come across as ‘same as, same as’...but they were important (for me, and maybe they will trigger a memory of something similar in whoever reads this).

The Teenage Mutant Hero Turtles hardcover annual
I used to go to my local newsagents quite often – once I was allowed to cross the road by myself and walk the two blocks – in order to buy sweets and a Superman (or Action, or Adventures of) comic.  One day, off I rode on my Street Wolf bicycle to the store and, after resting it against the window of the shop, I went in to get some sweets for my sibs and a comic for myself.  I scanned the lower shelves quickly and something red with flashes of green caught my eye: 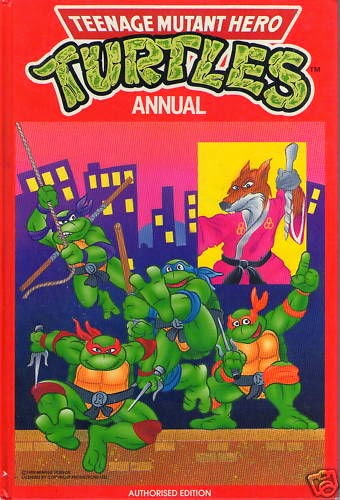 I gasped and picked it up and flicked through it and...saw the price and put it back, reluctantly.  It was too expensive, and it would take me weeks to put the money together for it from my pocket money.  I picked up the new Superman comic and the sweets my sibs had asked for and waited in line to pay.  Of course, I kept looking back at the shelves and that bit of red poking out...

The shop owners knew me well – that’s the thing with local stores: somehow a relationship forms without even realising it – and they could see I wasn’t my usual cheery self (I had a new comic book, I was always cheery when I had a new comic book), and they asked me what was wrong.  So I told them the situation (thankfully there was no one in line behind me) and they suggested that, if I really wanted it, then they could put it aside for me and I could pay for it in instalments.

I was thrilled at the suggestion and readily agreed.  I had done the maths and figured it would take eight weeks to pay it off, and they were okay with that.

The following week I made my first instalment of 50p – seriously, it was a big deal for me back then, okay?  As I made to leave the store with the goodies for my sibs (it was ‘skip week’ so no new Superman books) someone called out to me.  I turned and saw it was one of my neighbours – our gardens backed on to each other (well, his was across to the left of ours, but I ‘knew’ who he was).  He asked me about the annual and why I hadn’t taken it with me – he had seen the shop owner write my instalment payment in pencil on the inside back cover of the book (no hissing, I wasn’t ‘collecting’ back then).

‘You know what?  Eid’s coming up, so how about I buy it for you as an Eid present?’

I gaped at him, and then frowned.  Why would he buy me a present?  Sure, I ‘knew’ who he was but I didn’t know him-know him.  Why would he do this?  Yup, alarm bells were going off and I began to back away.

‘Uncle’ (the shop owner (most adults were ‘uncle’ or ‘aunty’ back then)) approached us and asked me if everything was okay, and my neighbour then explained his proposal.  Of course ‘Uncle’ knew him better than I did, but he even asked him if it was ‘proper’ and ‘what would the boy’s parents say?’

‘It would make the boy happy.  There’s no harm in that, right?’

Sure, it would make me happy, but ‘Uncle’ was right: what would Mum and Dad say?  They probably would have freaked – as much as he was a neighbour he was still pretty much a stranger...

‘Dad!  Look!  The uncle who lives opposite us bought me this!’

‘Who?’  Dad was frowning, and him frowning wasn’t a good thing.  He held out his hand and I handed him the annual.  I knew I should have gone with my instinct back at the shop.  ‘Who bought you this?’

‘The uncle who lives opposite us.  The one with the green windows,’ I said, pointing towards the garden.

Dad’s frown deepened, and then he looked at the open front door and said: ‘Where’s your bike.’

I’m telling you honestly: if my heart wasn’t so attached to me it would have rushed out of my chest, dashed back to my bike, and then ridden it home and said ‘tada, its’ here!’.  Of course, my heart couldn’t do that.

Dad didn’t run, but he wasn’t walking slowly, either.  As I tried to keep pace with him without running, I explained how ‘the uncle who lives opposite us’ had said it was for Eid and it was a present.

Then Dad held my hand: ‘and you promise me he didn’t touch you or anything like that?’

He hadn’t.  Other than talking to me, all he had done was buy the book and hand it to me.

Then, walking towards us, was ‘the uncle who lives opposite us’.  He waved at Dad and I, and Dad held up the book.

(note, their conversation is an English translation)
‘He can’t accept this from you.  I’m sorry.’

‘Brother, please.  There was nothing meant by it.  Your son likes to read.  We all see him sitting by his window reading.’

‘Just treat it as an Eid present.’

For a few minutes they had this back and forth but, eventually, Dad relented and ‘the uncle who lives opposite us’ promised that if he ever wanted to buy me or my sibs anything then he would ask Dad first.

Hmm...this post has not turned out the way I expected it to.  It was supposed to be a small comment on how ‘the uncle who lives opposite us’ was one of the people to show me that a random act of kindness (like buying a kid a book) was awesome, but that sometimes you need permission from a parent first, otherwise it could be construed as weird or inappropriate...

Oh, and the bike was still there, in case you were wondering.

Dad asked Mum to make a sweet dish and then he went round to ‘the uncle who lived (they’ve since moved) opposite us’s house to give it as a thank you.